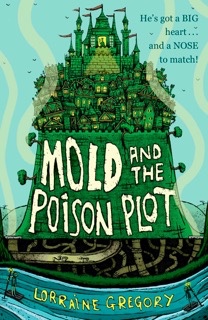 In this second instalment middle grade author Lorraine Gregory tells us about the catalyst moment that propelled her into the industry, the journey to getting an agent; how she found her voice and genre and who championed her along the way.

Tell me how important the Golden Egg experience was to your development?

After several years of writing and two manuscripts submitted to agents with good feedback but no deal it seemed like I was getting close but I couldn’t seem to get to the next level with my writing. I thought my latest MS (Mold and the Poison Plot) was good but I wanted professional eyes on it in the hope they could tell me what I was missing. I heard about Golden Egg through Twitter and at the time they were just starting out and offering one to one’s with an editor at a rate I could afford.

It made such a huge difference to my work…Maurice Lyon was my mentor and he showed me what I needed to do to push my writing up a level. Then Imogen Cooper, who set up Golden Egg after working at Chicken House, opened my eyes to the structure of writing and helped me hone my editing abilities before I sent out my reworked MS to Kate Shaw at the Viney-Shaw agency who signed me up as a client a month or so later.

I was very lucky to be able to access Golden Egg on the small budget that I had, to me it felt like a worthwhile investment in something that was very important to me and I’m so glad I did. It was a huge learning experience and also enabled me to meet some of my very best friends through their social events.

I think I could have got to the same stage on my own eventually but it would have taken me much longer and probably been less fun!

If you don’t have the budget for something like Golden Egg then I do recommend getting some chapters critiqued with The Children’s Book Circle – who offer events at reasonable prices with professional editors – also conferences, SCBWI and other writer events often have the opportunity for one to one’s and many of them have scholarships or assisted places. And there’s always the option of using a crit group or partner to help you hone your words. And read, there are some brilliant books out there on writing and masses of stuff on the internet…plus social media is your friend..opportunities, competitions and special offers are often listed on twitter.

You can find out more about The Golden Egg Academy here –

Which writers inspire you? How did you decide to write for middle grade? How do you decide which ideas to grow into a story?What do you do to develop your characters?Tell me about Mold and the Poison Plot and what made you tell this tale?Who have been your champions and what difference did they make?

I’m inspired by Frances Hardinge, Katherine Rundell, Laini Taylor, Leigh Bardugo, Cressida Cowell, Jonathan Stroud and so many more because their books are brim full of imagination and transport me to other worlds that feel entirely real and solid.

I didn’t really DECIDE to write for MG – as I said, I started writing for my son who was around 9 or 10 at the time and I realised it was the PERFECT place for me. That age group is a delight to write for, anything is possible and the stories are full of adventure and heart and while they can be dark there’s usually a positive and uplifting aspect too. Previously I’d always tried to write for teens or adults but they always felt stilted and awkward but writing for children was a natural fit so I’m really glad I found my place there!

It’s not easy deciding which ideas to pursue, often I’ll have a few ideas playing around at the same time and I’ll drift between them making notes and thinking. Usually the thing that will start me writing one particular idea is when I find the voice that works. Some projects do shout louder than others but mostly I think ideas are just waiting their turn…my next book is a fresh version of one of the first manuscripts I wrote…the idea was always good, it just needed to wait for a while before it was ready!

I do quite a lot of work on characters – usually I find I have to draft it out once so the characters can reveal themselves a little on the page, then I’ll dig down into their motivations and make sure they hold their own within the story.

I’ve been known to sketch my characters but I’m a terrible artist so I’d never show them to anyone.

I also often do timelines and histories for my world and how my characters fit into it. I think it’s really worth investing time into characters because nothing works without them – the best plot in the world means nothing if your characters don’t inspire and engage the reader.

The idea for Mold came all of a sudden when I was editing another manuscript and demanded my attention. I plotted it out in a day and drafted it in three months and it was huge fun to write.

There is much of me and my own issues in this book.

Some of which were subconscious – eg Mold lives in the Dregs – a close but deprived community of misfits looked down upon by their richer more privileged neighbours – is a barely disguised reference to the council estate where I grew up.

Some of the issues were conscious though – eg Mold has a big nose as do I. Having been teased and self conscious about it most of my life I realised that the media has always portrayed villains as having big noses, while the heroes, most especially the Disney princesses for example have tiny, perfect little noses. I decided to make Mold’s nose special and give him an amazing sense of smell which he must use to help save his guardian Aggy from the hangman’s noose and discover the truth behind the Poison Plot. To make all heroes handsome and villains ugly or disfigured is lazy, dangerous stereotyping and I think children need to see better from us.

There is also a strong theme of diversity and tolerance in the history of Pellegarno and the different people that lived there – I didn’t plan it necessarily but my own feelings seeped through and it soon became an intrinsic part of the story and Mold himself.

Certain elements snuck in and only after it was written did I realise that Mold feeling different to everyone, out of place, looked down upon and not fitting in was actually how it felt for me growing up as a mixed race girl from a council estate. It made me realise that despite leaving the council estate behind when I was 18, I’d never fully left behind those feelings of inferiority.

My champions have been Imogen Cooper at the Golden Egg Academy who first made me feel that I was good enough to be a published writer and then my agent Kate Shaw whose faith in me and my work has given me the confidence to push on past rejections and setbacks and keep writing regardless.

I’m also hugely lucky to have wonderful writer friends who make me laugh, keep me sane when the strangeness of the publishing world threatens to overwhelm me, and bolster my shaky self confidence as necessary.

I just want to say a huge thank you to Lorraine for sharing her story, for her honesty and the hope she inspires for future writers. Also a big thank you to Em Lynas for introducing us.

Lorraine Gregory is the author of “Mold and the Poison Plot” (OUP 2017) – which won the S.C.B.W.I Crystal Kite award for UK and Ireland in 2018 – and the forthcoming “The Maker of Monsters” (OUP May 2019). She co runs the popular, bi monthly #UKMGCHAT on twitter as @authorontheedge and can often be found procrastinating on there about books, toast and cats! You can find out more at https://www.lorrainegregoryauthor.co.uk

As the daughter of a Yorkshire Fisherman and Irish Mother, my writing brings together the visceral and the magical. My debut novel #How Saints Die was published with Harvill Secker in 2017. It won New Writing North's Northern Promise Award as a work in progress and was longlisted for the Desmond Elliott Prize in 2018. My poetry has been commissioned by BBC Radio, The Royal Festival Hall and Durham Book Festival. As a child of an 80s council estate I am an advocate for working class writers and stories. I’m currently working on my first poetry collection The Book of Godless Verse and my next novel. I try to live up to the words of my first critic and primary school teacher ‘weird minus one house point.’ View all posts by Carmen Marcus

This is a text widget. The Text Widget allows you to add text or HTML to your sidebar. You can use a text widget to display text, links, images, HTML, or a combination of these. Edit them in the Widget section of the Customizer.